This morning, Kathy and I were heading into Wooster to participate in early voting. We thought we would stop at the golden arches to have breakfast. Problem was that there was renovation going on at Mickey D's and half of the parking spaces were not available. So it was off to another place to eat. 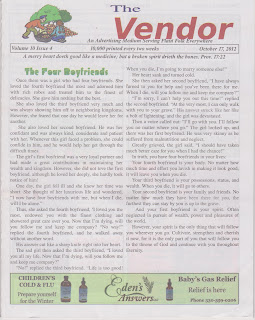 We went to The Parlor, a restaurant on w. Liberty St. We have eaten there before, and the meals are very reasonably priced. And while I'm there, I always grab a copy of  The Vendor, a free magazine that gets most of it's revenue from advertising. And the magazine had some good articles. Most of the articles are faith based. I would guess the Amish community would be readers of this publication.

There are also recipes, factoids, and clean one liners throughout the magazine. But best of all, it's free. And like most folks, I like free.

The restaurant has some pretty good food as well. I had biscuits, gravy, home fries, and sausage. Kathy had corned beef hash and toast. With drinks, bill come to $12.45. They don't take credit or debit cards, so I had to,walk a block to the closest bank to get money out of the atm. The owner told me that that could have waited since he had plenty of dirty dishes and toilets to clean. Place definitely has a good atmosphere and worth return visits.

I'm Fat, But You're Ignorant!

Over the years, the main things I have had to deal with have been health problems, They are nagging, but chronic issues, such as diabetes, hypertension, and arthritis. I can probably attribute most of this to either heredity or obesity. It depends on how much I want to factor personal responsibility.

Being fat gave me a convenient excuse when I was losing my shirt as a retail salesman over 20 years ago. I would come home after not making any money on commissions and tell Kathy, "Nobody would buy from me because I was fat and ugly." Met a new friend back then too. His name was Prozac.

In the past year, I have lost over 30 pounds. I feel better and clothes fit better as well. I'm still overweight, and I need to get off my fat posterior and do some more about it. Truth is, I have been fighting a battle with my weight since I was 11 years old. As an adult, I have seen a high of 305 pounds and a low of 186. So I know what to do to lose. Just isn't as easy as some like to think.

A video which has gone viral in the past few days is from news reporter, Jennifer Livingston. If was in response to a comment made by someone who wasn't even a regular viewer.
All I have to say about that is "You Go Girl!" That's right. Most of us know we are fat, as we do have access to mirrors.

I would guess Jennifer Livingston has to work harder at her craft because she's not blonde and a size zero. I'm sure the station recognizes her hard work. Most of us who don't fit the typical Hollywood stereotype have to work harder to accomplish anything.

I was in an exchange with "the trolls." One had run out of ammo to shoot at me, so this person referred to a photo I posted of myself in an earlier blog post and told me that I should spend time on a treadmill. Yep, when all else fails, play the "you're fat" card.

Walk a mile in my shoes. Just make sure you are wearing diabetic socks and support hose. Also check out the latest stats on obesity in America. Also don't be so quick to judge.
Posted by 74WIXYgrad at 9:06 AM 1 comment: