I'm writing this post because of some disturbing news. This past week a local teenager committed suicide, a result of being bullied. According to word on the street, he was bullied because he was different. In what way was he different? I don't know. Does it matter? No.

This coming Friday is the 3rd anniversary of my brother's passing away. He was epileptic and developmentally disabled, today's politically correct term. He was also a target of much bullying because of the fact that he got upset easily. I had the same problem because I never learned how to defend myself without causing more trouble for myself. And my dad told me that if I ever got into trouble for fighting, I would be beat when I got home.

Thing about bullying is that the bully always goes after those who can't defend themselves, for whatever reason. And nowadays, with schools adhering to a "zero tolerance policy," most of the time those who do the bullying get off scott free.

And most bullying is mainly about mental cruelty. Ask anybody who grew up with a weight problem, a physical, or mental disability. I spent a good part of last year making amends with some who hurt me and others that I hurt while attending high school. You might say that "we were just kids". Don't matter. I felt better afterwards.

One friend that I feel very fortunate to have now is Johanna. She was given a very cruel nickname from one of my so called friends. Like the immature kid I was, I followed the pack and teased her unmercifully. We became very good friends our senior year and Johanna was a very valuable help in putting together our class reunion last year. I thank God she knows how to forgive.

There were some students in church this morning when our pastor addressed the bullying problem. Before the service ended, I got up and said that one of my favorite phrases in the Bible is "and it came to pass". In God's eyes we are all unique and special.

My next post will be a classic from last year, the turning point of my adolescent years.
Posted by 74WIXYgrad at 1:55 PM 5 comments:

When life gives you lemons...go bowling 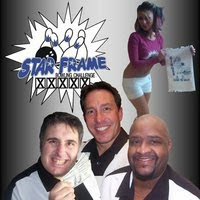 In April of 2009, I was headed out to my son's apartment when my cell phone rang. At the other end was Paul Rado. He was informing me that he had just been let go from his job as producer of the Mike Trivisonno show on WTAM/1100. This was a part of the never ending cost cutting measures in the world of radio.
I wrote a post about here the next day, and Paul was gracious enough to leave a comment thanking everybody for their well wishes as well as some other insight-
"To all,
Thank you for your well wishes. (if you well wished us)

I was taught that when someone says something negative about you it'll only hurt you if you let it hurt you.
I'm not reacting to the dismissal as a negative, them saying I'm not good enough to be on radio. I'm going to treat it as an opportunity to go somewhere else and continue entertaining the radio or TV audience in a credible and informative way. But this time from in front.

Ever since elementary school I've been standing in front of my peers and entertaining them. I plan on continuing that. I have no choice. It's what I do.

I also feel that Marty Allen and I are affordable to most stations... as long as we don't work for food.

Sincerely,
Paul Rado"
Paul found, as many of us also found, that the job market was tough, but that didn't stop him from looking. He also did some charity work, putting together the USO Brad Davis Cornhole tournament.
The end of October, 2009, I had lunch with Paul. It was there at Applebees where he told me about an idea of a game show, a Bowling for Dollars type show. The show would be called the Star Frame Bowling Challenge.
This past fall, the idea became a reality. The Star Frame Bowling Challenge is the only locally produced game show in Northeast Ohio and it's as Cleveland as the Terminal Tower. Paul, along with cohost Chuck Galeti, and announcer Marty Allen feature 9 area bowlers every week trying to get as much of Paul Rado's money as possible. And there's always a guest star around checking out the newest hit on Cleveland television. The idea is to get 5 strikes in a row to win $100 dollars for each in the star frame. There are other ways to win Paul's money as well. And for you guys, you can also check out Ginger the ball girl.
If you live in Northeast Ohio, you can catch the Star Frame Bowling Challenge Saturdays at 3:30 PM on WUAB/My43, or at Saturday midnight on WOIO/CBS19. Also check out the Star Frame Bowling Challenge website.
Posted by 74WIXYgrad at 9:47 AM 2 comments:

*News Flash: The Cleveland Cavaliers have set a new record for a losing streak during the season.*
Cliff Note: So what else is new?
As most know, I live in a region that has been devoid of a major sports championship now going on 47 years. Most of the time, the teams lose more than win, and during the rare occasion which it looks like the "curse" may be broken, something happens. Things like "red right 88", "The Shot", "The Drive," "The Fumble", and most recently, "The Decision."
There's one of two things a resident of Northeast Ohio can do: One is bear with it, and the other thing is move. Seeing that sports is not the be all and end all in my life, I choose the former.
Being in my mid fifties, I know that there is more important things to life than sports and since I no longer work in Cleveland, I don't have the emotional attachment to the town or their teams. I also think that Major League Baseball and the National Basketball Association are not happy unless the biggest markets are showcased during the championship of their respective sports. I have other thoughts about how some things come down, but they are based on feelings and not facts.
My friend, Terry Pluto, who is a sportswriter for the Cleveland Plain Dealer, likes to say "Don't let the millionaires ruin your day," and generally, I don't. But I would like to know where i could go and do as crappy a job as some of these overpaid mental midgets do and get get paid as well as they do.
Posted by 74WIXYgrad at 12:03 PM 2 comments: