This morning, I woke up to the news that former Cleveland Browns and Baltimore Ravens owner, Art Modell, had passed away. He was a villain to the city of Cleveland for moving the franchise. Cliff Note: I know he was probably considered a hero to Baltimore for bringing football back and for getting them a Super Bowl ring before the Indianapolis (formerly Baltimore) Colts won one, but this post is about forgiveness.

Cleveland, like many other cities, lives and dies with it's sports franchises. Since the Browns left, northeast Ohio has also seen several top athletes leave and "take their talents" elsewhere. These folks go from being number one, as a show of the index finger will indicate, to not being number one with the next finger over also indicates.

Most decisions are made as financial decisions. We have seen this many times in business. People are either let go from their jobs, or jobs get outsourced. This gets plenty of ink, but people forget and move on. It's more personal decisions that get the grief over for the longest time. There are those who have a problem against a parent, siblings, an ex spouse, other relatives, or someone who did you dirty many years ago. You feel that you cannot forgive, or forget their actions. that's when you have to look up to a higher power. My higher power is a man named Jesus Christ.

Jesus said in Mark 11:26 "But if ye do not forgive, neither will your Father which is in heaven forgive your trespasses." Sometime we have to realize that the same things committed against us are things that Jesus went to the cross and died for. Granted, there have been things done that you have a hard time wrapping your head around at the very concept of forgiveness. This is where the childlike faith that Christians are required to have comes into play.

In the grand scheme of things, something that took minutes to commit, should not end up controlling a lifetime of emotions. Also remember that eternity makes the time we spend on earth seem like less than a moment.
Posted by 74WIXYgrad at 9:08 AM 1 comment:

Okay, in the 6 years that I've been blogging, I have been somewhat harsh on the largest retailer in the world, Walmart. Most of it has been directed at the one I frequent the most, #2966, Wadsworth, Ohio. I have used the term Evil Big Box Store(tm) pretty much tongue in cheek. I do go there because I can save money and get what I need in one stop over the Giant Eagle one exit over.

Out of fairness to a good friend and distant relative, I have toned down the snarky posts. Cliff Feightner of Homassa, Fl. fame, works for Walmart in a management capacity and I don't want that Cliff Feightner to get into trouble because of what this Cliff Feightner writes.

Anyway, when I stop at Walmart on my way home from work, I like to go through a checkout of a cashier named Bonnie. The reason being is, no matter what, she always has a smile on her face and a good word for the customer.

First time I went through her line, she asked me how I was doing. I responded with "Better than I deserve." Most listeners of the Dave Ramsey show are familiar with that response. Bonnie correctly responded, "oh, Dave Ramsey." And so began a very pleasant checkout experience. And at the end of the experience I gave my usual "thank you for working at Walmart."

Everybody who would go through Bonnie's checkout will be in for a customer service treat. We all know shopping can be stressful and sometimes the last couple of minutes in the store could be the deal breaker concerning future visits. Bonnie's smile and her general attitude helps to ensure future visits for those who are fortunate to get her to ring them up.

And contrary to what one of the trolls reading this blog thinks, I do not harass Walmart cashiers. They are a very hard working bunch who don't get the recognition they deserve. I hope someone in Wadsworth reads this post and gives Bonnie a pat on the back for all who have the fortune of going through her line.

From the Pressbox: Rittman vs Cleveland Knights, Halftime Highlights 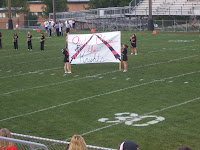 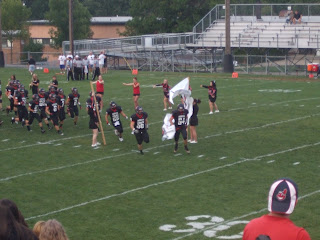 This past Friday evening, the Rittman Indians football team played host to a group of home schooled high school athletes called the Cleveland Knights. The game was originally scheduled to be played at Case Western Reserve University, but due to a scheduling conflict, the venue was changed to Rittman. Two touchdowns along with two point conversions by Rittman, and a touchdown with a failed conversion attempt by the Knights made the halftime score 16-6 in favor of the Indians. 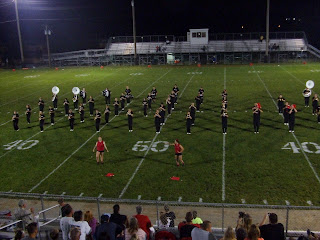 The Knights had no marching band, so my favorite group of student musicians had the entire halftime show to themselves. After the best entrance and band intro in Northeast Ohio, the Rittman Marching Band performed tan original tune by Jim Swearingen, called Fired Up. The majorette feature was the Roy Orbison hit,Oh Pretty Woman.

During the next selection, The Pennsylvania Polka, I was recording the performance with my iPhone. I was also looking at my script to ensure I had the right intro lined up for the next song. I missed one of the senior trombone players falling in front of the crowd on the 50 yard line. I was informed of this after I put this on my Facebook page. More about this later.

The circles continued on the next selection. The best marching band in Wayne County delighted the audience  as they performed the Colonel Bogey March.

And always ready, willing, and able, to entertain the baby boomers in attendance, the Marching Indians performed their show stopping rendition of the Beatles hit, Twist and Shout.

After halftime, and after I uploaded the aforementioned video to Facebook, I had told Emily, one of the majorettes, that I had done so. She then responded with, "I want to see the part where Brian fell." I then went to Ed Sims, who is the Rittman band director, and an all around good guy, and asked him if I should keep the video on FB. Ed's response was maybe for a little while. A few minutes later, we both decided to let Brian make this call. I showed Brian the video and he thought it was great. Being one of my Facebook friends, I asked Brian to make a comment on the post. He did that, and also asked me to post the video on my You Tube account. All this is why I even mention the incident here.

Although it was a well fought game, the Knights prevailed, final score 26-24.

The Rittman Marching Band is a show band. Ed Sims' goal is to get the best out of his student musicians, and for them to give the very best performance every time they are on the field. My responsibility is to make sure that I time my delivery, as there are some times between selections that the band members have to switch their position on the field. I pride myself with very little dead air during a Rittman performance. I credit this to my broadcast schooling.

Granted there are some announcers who think the show should be in the press box and not on the field. There are also the corps band announcers who come on, tell us where they come from, who are the superintendent, school principal, band director, assistants,  and flag line director are. They announce what the music is, then they get out of the way and let the band performance their competition routine.

I've been doing the announcing for the Rittman Marching Band since the 2000 football season, which explains my popularity in the press box. I have been told by some of the best student musicians in the area that I'm a very important part of their show. I have been told the past couple of weeks how much I was missed last year when I couldn't announce their last two performances. The gentleman who announced in my place did a great job, I saw the video. The band agreed, but their timing was off because it was not me in the press box.

There are times when I mess up and I'm my harshest critic. Sometimes I regard YouTube as my personal blooper reel. I will watch some of the videos to see how I can improve myself. I take my responsibility seriously and there are those who consider me one of the best.

Next Friday, the 0-2 Rittman Indians play host to Mapleton, and Saturday the Rittman Marching Band performs at the St. Vincent-St. Mary Band show.
Posted by 74WIXYgrad at 8:21 PM No comments: