Classic Post: this is Larry Morrow, a book review.

Cliff Note: A week and a half ago, when I was in the WIXY 1260 Online studio, I was being interviewed by Lisa Jordan. We were talking about WIXY Superman, Larry Morrow. Lisa mentioned his book. Here is a repost of the review I had written about the book. 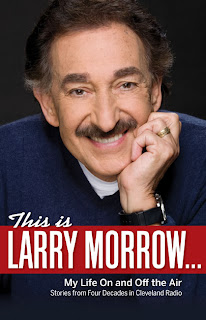 The area of the country I live in has seen many talented people come and go in television, in radio and on the athletic field. Most of these people feel the need to take their talents elsewhere. The book I'm reviewing for this post is about one of the unselfish few who stay and use their talents for the betterment of the community.

One of the media friends I have made since I started blogging is Sue Wilson, who happens to be the program director of Akron, Ohio country music station WQMX and morning show co-host. Sue had told me that Larry Morrow was one of her positive influences during her career in radio.

This is Larry Morrow...My Life on and off the Air is the autobiography of one of the classic good guys of the Cleveland airwaves. Larry tells us about his life, how he got into radio, and why he moved to, and fell in love with, Cleveland.

Larry Morrow was one of the original WIXY Supermen, the lineup of disc jockeys that helped make WIXY/1260 the legendary station it was. Larry tells quite a bit about the others, especially those behind the scenes, that helped make WIXY the success it was. At that time, he was the midday personality there and his audience was mainly housewives. In playing to that audience, there was a daily contest called what's cooking, where Larry would reveal ingredients to a recipe one by one in between playing the hits of the day.

Next stop was 3WE, where he would replace legendary announcer, Jim Runyon. It was those days I listened to him as I got ready to go to school. I used to enjoy hearing about when he got his morning coffee from David's Place, especially asking newsman Hugh Daneceau if he enjoyed his coffee. It usually was responded to by a tape of wrestler Pampero Firpo saying "ohhhh yeah."

Larry also chronicled his years behind the mike at WQAL. Wherever he stopped, he always left a positive imprint. The title that he was most proud of was "Mr. Cleveland," one he wore with pride. Larry first moved to Cleveland during the Hough riots in 1966, and he has spent the last 40 plus years working with civic leaders for the betterment of his adopted community.

This book is a very easy and enjoyable read. Even though it's about the life and career of Larry Morrow, there's ample credit to go around to everybody in his life. In the times in his career when things could have gone better, Larry spent very little time being bitter. To me that's the sign of a good pro and a great man. And you can feel safe letting anybody in your family read this book as Larry, a born again Christian, used no offensive language in the writing of the book.

To read a sample from this book, click here.


Cliff Note: I want to thank Jane Lassar, publicist at Gray and Company for providing me with the resources for this post.
Posted by 74WIXYgrad at 10:07 AM No comments:

Cliff Note: In honor of my recent visit to the WIXY 1260 online studios, I'm reposting this. I originally posted it September 17, 2007.

I know, I know. Tim Lones is the classic media expert, but I've had the 74WIXYgrad moniker long enough to be able to post about one of the all time classic top 40 radio stations.

Next, a shout out goes to Ray Glasser, webmaster of the unofficial WIXY/1260 tribute site, where I got the header for this post. Ray was kind enough to leave a message for me in my comment section last weekend.

I think all of us baby boomers had our own personal stations when we were growing up. Me, I had several. First station I can remember listening to was KYW/1100, then WKYC or KY11, Power Radio.

When I was about 12 years old, I discovered the station which would provide the soundtrack for most of my teenage years-WIXY/1260.

It was 1967, and I had gotten a transistor radio for Christmas, which was a big deal for me. that meant I could tune wherever I wanted. I would go from KY11 to the Big 8-CKLW, which was in Windsor, Ontario. Most of the time however, I would tune in to WIXY since that's what all the "groovy" people did.

I first listened to Joe Finan doing the morning show and remembered when he was walking for some charity and would walk while the pledges were coming in. I remember one time that day that the pledges momentarily stopped and the disc jockey on the air told Joe to stop walking.

I remember Larry Morrow, with his "What's Cooking" contest, where he would give ingredients then ask listeners to guess what he was making. His show was catered to young housewives and it aired from 10am to 2pm.

Mike Reineri soon replaced Joe Finan in the morning and was morning man for most of the 10-1/2 year history of WIXY. One of the producers, Ira Rubins, was the education director at the WIXY School of Broadcast Technique when I attended. One of his newsmen was Bill Clark, who became general manager at the WIXY School.

While I was attending classes, I was able to hear some humorous stories about the station. One of these was during the Mike Reineri show. Ira said that Reineri was taking a call from a lady who said she had a problem, but couldn't disclose it for fear of embarrassment. he than told her that she could tell her problem, but was easing away from the "dump" button. After enough convincing, she told Mike she had a bad problem with gas. At this point everybody in the studio has a world class case of the giggles. Mike Reineri then did the only thing he could do- he hit the news sounder. Bill Clark then gave the fastest news report he would ever give and taped the rest of his reports that morning.

Other stories had to do with Larry Morrow. It was said that sometimes it was a challenge to break him up while reading commercials. One time someone set fire to the copy he was reading, another time he was reading a commercial for an acne treatment product when someone had put red spots over their face in anticipation of the commercial, put something in their mouth and popped their face like a pimple.

When I went to the school, I went past the WIXY studio, which was glass encased. The mid morning jock at that time was a man named Michael Collins. I went past there one day and he was interviewing a young Michael Jackson(insert joke here). Another time he was interviewing Ron Howard and Anson Williams. They had been on the Morning Exchange earlier, being in town to promote their fairly new show "Happy Days."

I would say that one of the big thrills this wet behind the ears, 18 year old recent high school graduate had was when I was asked to give up the studio that I was practicing in for this ad agency who wanted Mike Reineri to do this commercial. It was a 10 second spot for a sale on "Bomb Pops" at Convenient Food Mart.

All I have to do is tell people my forum name, and the first reaction is "I remember WIXY." The most recent response was Tim Daugherty last weekend at the St. V-St. M band show. The WONE morning show host told me that he was one of the last listeners of WIXY, as he was listening when the station changed their call letters tio WMGC, the first "Magic Radio" in Cleveland. He listened to WIXY when others were defecting to G98.

Once again this has been some of my personal reflections. To learn more about this all time classic station, click here to go to the WIXY Tribute site, and drop Ray Glasser a note, telling him how much you appreciate his efforts.
Posted by 74WIXYgrad at 8:15 AM No comments:

I Was a Guest WIXY Super Man!

Been there, done that, and got the t-shirt. Literally.

I achieved a goal that I thought never would happen. I was a guest on WIXY 1260!

The current incarnation of this classic radio station is available on the internet at wixy1260online.com. This is a work of love by Ray Glasser and Gary Schmitz, a couple of guys who have a passion for classic radio. This station is streamed 24/7, mostly automated with a playlist of over 4,000 tunes, which is more than 13 times what any commercial station has. WIXY 1260 also has some disc jockeys who love to play the hits live. And the word is getting out about this classic! And this past Sunday, the special guest of Lisa Jordan and Majic Mike was Poetry Man himself, Cliff Feightner.

Of course those who have followed this blog from the beginning know about my internet handle of 74WIXYGrad, that I took the name because I was a 1974 graduate of the WIXY School of Broadcast Technique. And one of the first links I put on this blog was the one for Ray Glasser's WIXY 1260 tribute site. And everybody should check it out. He does add new material to it constantly. It is a great place to go if you are a radio geek.

My trip to their Lakewood, Ohio studios, began with a Facebook friend request. I thought I would shoot a request to Lisa Jordan. She's one of the WIXY jocks and the thing we had in common was that we are both band announcers. I wrote a Random Act of Poetry™ on her timeline. It was well received. She also "liked" my Poetry Man Facebook page.

A short time later, I made the suggestion, tongue in cheek, that Poetry Man should be a guest on a live show on WIXY 1260. Lisa thought it would be a great idea and, very quickly, the wheels were set in motion for my appearance. I got some limericks and one liners together and took the trip north. And Ray thought it would be a great idea to make a video of my appearance. And yes, I was nervous as heck. Jeff Kinzbach messaged me and told me to relax and have fun. Everybody at the "Studio of Solitude" (Cliff Note: this is my term, but they are the WIXY Super Men, and Super Woman) told me the same thing.

Show time, I was on with Lisa and Majic Mike, who at one time hosted the Elvis Only show on WMJI. Everybody in the studio was a great encouragement to me. And during the show I got messages via text and my Facebook page, from friends and family letting me know that they were listening.

I had some limericks about the classic WIXY Supermen and some about artists on the 4000 song play list. The 2 hour appearance went very fast, we had many listeners, and I was invited back.

I also gave a suggestion on how to get WIXY 1260 online on your smartphone. Download the TuneIn app, and there are others, to your phone, go to WIXY 1260 Online, choose it as your favorite, and pretend that you have a transistor radio.