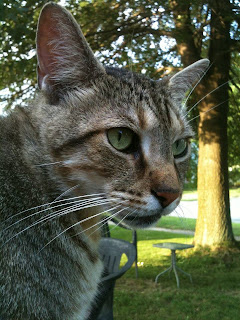 There have been blog posts, which I have written in the past, that I write to work out a bit of grief. This is one of them.

This morning, I had to make the decision to have our 12 year old cat, Goober, put down. It was not an easy decision, and I left the vet's clinic in tears. Never thought a 57 year old man would do that over a cat. But I have been told several times today that a pet is still part of the family. And in the 12 years that Goober was around, he was pretty special.

First point of I'd like to make is that Goober was not named after George Lindsay's character from the Andy Griffith Show.  I named him Goober because his mother's name is Peanut, named so by my daughter, Sylva, after she ate a peanut M&M. My reasoning was that another name for a peanut was a goober pea, hence the name.

Peanut came to us as a stray, and I was talked into keeping her because my family loves animals. Before we could get her spayed, she brought a litter into the world. We were able to find homes for all except one. goober happened to be the smallest one of the litter, but soon grew to be a good sized cat. And he had a special way of greeting you, sticking the top of his head in your face. And, like most pets, he soon got the run of the house. In the summertime, Kathy would be sitting outside reading. goober would decide when it was time for her to stop. Most of the time, he would not leave her side.

As long time readers of this blog are aware, I have sleep apnea and need to use a CPAP when I sleep. When Goober decided it was feeding time in the middle of the night, he would come in and turn of the CPAP, then nudge the mask off my face. He would get fed then allow me to go back to sleep.

For the past week, or so, Goober hadn't been feeling well. He wasn't eating, and was having problems breathing. When I got him into the vet's this morning, he was crying. The vet said that he was in bad shape and the choice was mine. Kathy and I decided that the humane thing to do was to have him euthanized. As I was leaving, I went to the desk to settle my bill. My eyes were red. I commented to the assistant at the desk that I wouldn't want her job at a time like this. she said that there are times that her job can suck.

I guess that had Goober not been as special as he was, I wouldn't feel as bad as I did. But like family members that have gone on, I can look back at the good memories we have of this special cat.
Posted by 74WIXYgrad at 2:52 PM 4 comments:

What's in a Name?

One of the benefits of  my award winning personality is that I have many friends who are around the same age as my kids or younger. One of my friends where I work is a young lady who shares a name with an MTV veejay from the 1980's. Her name is Julie Brown.

Julie's issue is not specifically with the name. It's with people who who constantly ask, "Have you ever heard of 'Downtown' Julie Brown?" She can't wait until she marries her boyfriend and can change the surname. I guess one of the reasons she likes me is that I never asked the stupid question. Cliff Note: There are times when one knows that there's an obvious obnoxious question that begs NOT to be asked. 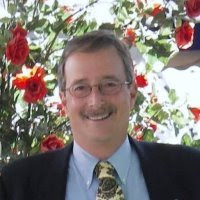 I find that it's better to have the same name of someone who isn't famous, but is somewhat high profile. I have shared the story before about "the other Cliff", Cliff Feightner, who lives in Florida. When I was working as an electronics sales associate in the Akron, Ohio area, I had people ask me, if I was related to a Cliff Feightner who was a supervisor at a major company in Akron. He had people asking him if he was related to me and had made it a point to come and introduce himself and his wife to me. Since this time, we have become friends and communicate mainly through Facebook. And as a certain irony, Cliff had been hired as a management trainee for a certain retail chain, that I have mentioned many times in this blog.

One of my goals is for Cliff and his sons, Erik and Chip, to be someday asked if they are related to that "Random Acts of Poetry" guy.

Giving Birth To A Dream 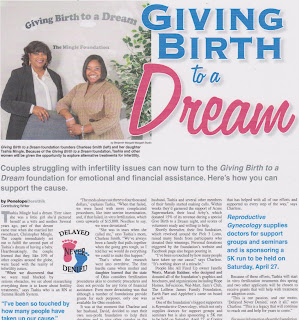 In the coming week, I will be learning about infertility issues. My friend, Charlese Smith, has invited me to announce for a benefit 5K run that takes place in Copley, Ohio on April 27, 2013. The beneficiary of this event is the Giving Birth to a Dream Foundation.

Charlese and David Smith started this foundation when their daughter, Tashia Mingle, an RN with the Summa Health System, and her husband, Christopher, realized that they were facing infertility issues. They also realized that, in the views of the State of Ohio, infertility treatments are elective and very expensive.

Charlese and David, in starting the Giving Birth to a Dream foundation, wanted to give their daughter and son in law, and others who represent 10% of the population, a better chance to conceive children of their own. there has been other fund raisers and donations from local businesses.

This Saturday, the 5K will give many a chance to give to this very worthy organization. There will also be several great gift baskets raffled off. Most important, will be the hope offered through the event by funds and awareness raised. 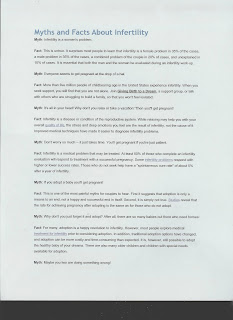 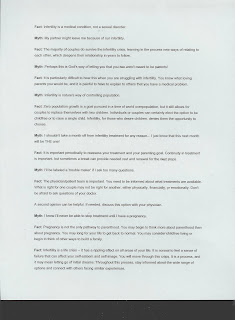 You can get more information about Giving Birth to a Dream by writing the foundation at this address:
3618 West Market St.
Suite #7
Fairlawn, Ohio 44333

Cliff Note: Click on images to enlarge and read all about the foundation and this great upcoming event! 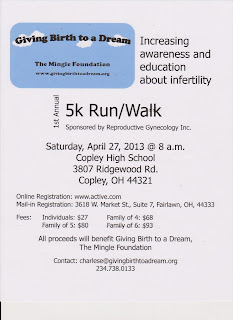 A Smile Goes A Long Way

I have mentioned in the past my little routine when I go into any retail establishment. I always end every transaction with "Thank you for working at...." I'm always amazed at the reaction I get. And those who are used to my routine are disappointed when I fail to say that.

I've been stopping at a certain convenience store lately to get a snack and soft drink. There are a couple of employees there who have a different reaction to the way I end the transaction. One person, an older gentleman and curmudgeon of sorts, tells me that he doesn't work for free. Another employee, a young lady, has a quite different reaction.

One day I was there getting a Coke Zero and pack of crackers. I was in line to pay the older guy when Mae told me that her register was open. I went over to her side, paid for my items and thanked her for working at the store. Next time I stopped there, I went to Mae's register. She told me that she enjoyed my positive attitude and my smile when I stopped by.

I'm proud to say that I have made a new friend. Mae is part of a growing list of friends I have made of people from my kids generation who have respect for their elders. Anymore that is becoming more the exception than the rule. Maybe if more of us older folk smiled at the younger folks and showed them some respect, we'll get it back.
Posted by 74WIXYgrad at 1:04 PM 6 comments: