When I was more actively blogging, I used to write these post quite often. Matter of fact, I was informed that one of them was printed and posted in the mail room at the Akron Radio Center. The subject was WQMX morning show co-host and program director, Sue Wilson. The informant was fellow band announcer and WONE program director, Tim Daugherty. Tim proposed to Sue on the air this morning. Congrats to them both. 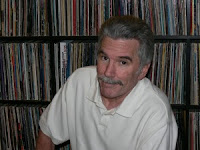 My subject today is another radio veteran. Jeff Kinzbach is an area radio legend. For years he, and newsman Ed "Flash" Ferenc were part of the highly rated Buzzard Morning Zoo on WMMS. As all good things, this came to an end. For awhile, the duo had an afternoon talk show on WTAM. Once this ended, Jeff and Flash went their separate ways. Jeff's route took him, and his wife, Patti, to Dallas, where among other things, Jeff established himself in business and raised cattle. Jeff had sent me a very detailed response that I attached to the comments to a post I had written. He emphasized the need of a back up plan.

A bit of homesickness brought Jeff and Patti back to Ohio. I found out in the most unlikely of ways. I was not going to be announcing the band show for the Rittman game on a particular night, as the bus would leave before I could get off work. I had heard that Highland, the school I graduated from was having alumni night, complete with an alumni band. I sent the Highland band director an email offering to be the alumni announcer that night. His response was that he had a new announcer who was anxious to start. He was "Jeff from Jeff and Flash." I shot Jeff a friend request on Facebook, which he graciously accepted. We then messaged back and forth, pertaining to announcing halftime shows. I sent him a tongue in cheek message, giving him three bits of advice: One, listen to the band director. Two, the show is on the field, not in the pressbox. And three, don't piss off the parents, as the band boosters are a very hard working group of people who always have to take a back seat to the sports boosters.

Later in the season, Rittman and Highland appeared in the same band show. Jeff came looking for me and made it a point to introduce me and my daughter to his wife Patti. For a few minutes we had a good exchange. He also messaged me the next day, telling me how much he enjoyed the Rittman performance. To me, this is someone who appreciates what life has given him and is willing to give back.

Since coming back to the Buckeye State, Jeff has found his way back on the airwaves, first being a substitute host on WNCX. Two weeks ago, Tim Daugherty introduced Kinzbach as the new morning show host on WONE. There are many aging baby boomers who were excited about this news. I'm excited about this because it's always great when a nice guy is on the winning end. Two weeks into the morning show, I find myself entertained by someone who has been to the top and has found a way to reinvent himself. And I find myself listening mainly to two radio stations originating from the same building. Live and local still exists, you just have to look for it.

Also Ed Esposito is a solid news pro, who adds his own brand of entertainment to the new morning show.

Cliff Note: The photo in this post was stolen from Ohio Media Watch.

Simulpost: Going Over the Virtual Bridge

Cliff Note: This is a limerick I posted this morning on my Random Acts of Poetry, formerly known as Whattville is on the Other Side of the Tracks, blog

It's been awhile since all my non Facebook have heard from me. So since I have a few extra minutes waiting for a doctor's appointment to end, I thought I would give my index finger a workout while starting this post on my iPhone. I will edit when I get back home on my laptop to make sure my auto correct didn't do any incorrect thinking for me.

First, a follow up on a previous post. Late last summer, I wrote a post about Bonnie, a Walmart cashier. Her general attitude and smile made me want to go through her line whenever possible. I had seen her in attendance at the Rittman football games. After halftime of the second game, I approached her. I told Bonnie that I thought she had looked familiar. Turns out that she has been a band mom for several years. Bonnie had not realized that I was the Rittman band announcer. She now  introduces me to her coworkers at Walmart as the best band announcer around. Just more of a reminder to be nice to those you meet. You never know when and where you will see them again. Cliff note: One of the trolls that has this obsession with me states on a forum that I harass Walmart employees. If saying "Have a great day, and thank you for working at Walmart" is harassment, then I'm guilty as charged.

New name for poetry blog: For the past few months, I've been writing at least one poem a day on my Facebook page. These are usually in the form of a limerick. In November, I took to writing limericks about my coworkers and it was about this time I came up with the term, "Random Act of Poetry." And as of February 3, the blog formally known as "Whattville is on the Other Side of the Tracks" has become known as "Random Acts of Poetry." Some of my work on Facebook will turn up there as well as exclusive content.

Hopefully I will be back here with other original content.