Sometimes I tell people that I graduated high school in 1974, "when dinosaurs roamed the earth." And to all you young whippersnappers, that is very much tongue in cheek.

Today, Kathy and I were out and about, taking care of some business. We stopped at Speedway to get some fountain drinks. I went in to get the drinks and Kathy noticed somebody parking their motorcycle. He left the keys in the ignition. She told me about the motorcycle, wondering if anybody would steal the bike. I told her that I remembered when I was growing up, my dad would stop at Lawson's, a convenience store chain in Ohio, go in, get a pound of lunch meat(sliced while you wait), a half gallon of milk, and a loaf of bread. But what I failed to mention is when he parked in front of the store, he left his car running.

Kathy countered with the fact they used to go to church and never locked the doors of their house. Such was life in the 1960's and 70's. When you lived away from the big cities, you never had to worry about people bothering what was rightfully yours.

I always wonder, what happened to the respect you were expected to show others?
Posted by 74WIXYgrad at 7:18 PM No comments:

Hope for a dying area

The above video is a walk through of the now defunct Rolling Acres Mall, which has been closed now for going on 4 years. A once vibrant shopping complex, it fell victim of being located in a depressed area, and of other close by malls experiencing renovation and rebirth. In 2008 when the final nail was applied to the coffin of this mall, I wrote this post concerning my memories of Rolling Acres.

There are several sites on the web dedicated to dying malls, and their surrounding areas. To me there is some interesting reading. Most of us should be concerned to what is going to become of the areas where these malls are located. Will they ever be of benefit to the community at large again?

At Rolling Acres, the only activity at present at the mall building is JC's 5 Star Outlet, formerly known as J. C. Penney's outlet store. The store still features goods from J. C. Penney, but at a discount price. And it is a popular location. The Sears store location where I once worked is now a recycling center. Up the street, the location where I worked, when known as Fretter, is now a furniture liquidation store. There is some rebirth for the area.

Yesterday, the Akron Beacon Journal and Ohio.com published this story about once busy retail buildings on Romig Rd. now being used as warehouse and office buildings. The mall itself, was sold last year, and may be reborn some day as a multi use center, small stores, maybe some call centers, and other businesses to once again serve the community.

Cliff Note: I realized after I posted this that today is my 6 year anniversary as a blogger. Thank you to all who have paid this blog visits since 2006.
Posted by 74WIXYgrad at 9:02 AM 1 comment:

From The Pressbox: Rittman vs Danville, Halftime Highlights 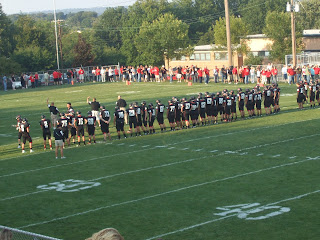 And the 2012 high school football season is underway! Tonight the Rittman Indians opened their season, playing host to the Danville Blue Devils. Game time temperature was comfortable, in the 80's, and as it has been all year, not a drop of rain. 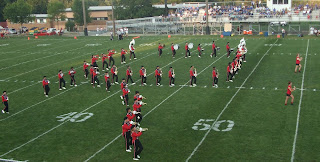 Tonight was parent night at the game, and the parents of those participating in fall sports, cheerleading, and the marching band were all invited to escort their kids across the field.

After pregame festivities and the national anthem, it's time to play football.

Though decidedly over-matched tonight, the Rittman team did not give up. They managed their only score during the first half.

Halftime saw a talented Danville marching band keep the crowd attentive with their three selection, beginning with the Jimmy Buffett classic, "Cheeseburger in Paradise," and ending with the Beatles, "Do You Want to Know a Secret."

And then it was time for the words the Rittman faithful have been waiting since last October to hear:

"LADIES AND GENTLEMEN, FOR YOUR VIEWING AND LISTENING PLEASURE......

WE TAKE GREAT PRIDE IN PRESENTING TO YOU...... 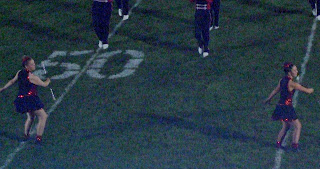 THE SEVENTY FOURTH EDITION OF THE RITTMAN INDIANS MAAAAARRRRRRRCCCCCCHHHHIIIINNNNGGGG BAND!"

The band came onto the field playing "Let's Groove," by Earth Wind and Fire. This was followed by, "Oh Pretty Woman>" The first halftime of the year was complete after the Indian Band rocked the house with their rendition of "Twist and Shout."

Great show tonight and a super effort by my favorite student musicians.

Tomorrow night, it's off to Sugarcreek for the Garaway Band Show.

This is the video from last Thursday's band show. The videographer is my 9 year old grandson, Ben. I may have some more videos to share as the season progresses.
Posted by 74WIXYgrad at 10:04 AM No comments:

From the Pressbox- Mogadore Band Show 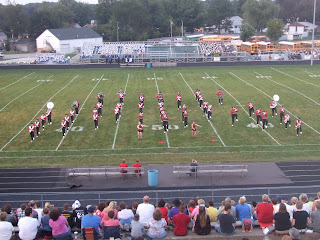 It has been a long time since I have wrote about my favorite group of student musicians. Since last season was cut short for me because of a slip in the mud, this show was important for me. I did have a few opening night jitters. But for me things went great.

The Rittman Indians Marching Band was one of 6 bands to perform at the 2012 Mogadore Band Show. The other bands appearing were from the following schools: Manchester, Windham, Akron St. Vincent-St. Mary, Hudson, and the host band, Mogadore.

Was a great night weather wise, as it wasn't too hot and it was not raining. 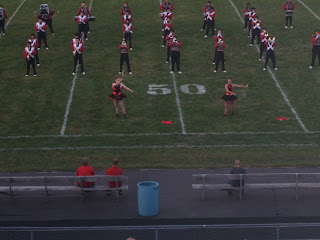 As I got to the stadium for the night's activities, my favorite student musicians let me know how glad they were to see me. They tell me that I'm the best announcer around. I tell them the only reason I'm a good announcer is because I have a great product to announce. This years Rittman Marching band has 54 members and they all are dedicated young student musicians.

Last night's show was a combination of hits from musical history. As the band took the field to the most awesome introduction in all of high school halftime entertainment, they opened with the song Let's Groove, the 1981 classic by Earth, Wind, and Fire. This was followed by the 1964 number one hit by Roy Oribson, Pretty Woman.

Next up was a little polka music. (Cliff Note: There was a typo in the script which I thought was ironic. Instead of "feel good music" the script said "FELL good." As I said, this was ironic that this appeared in the script at the first show I announced after falling and breaking my ankle last October.) The song selection was The Pennsylvania Polka. 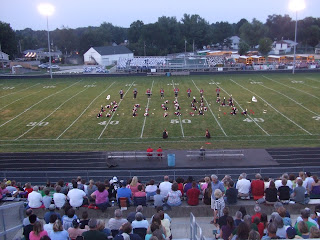 Then we were treated to a song from the movie Bridge on the River Kwai. The band entertained the audience by marching in circles and playing the Colonel Bogey March.

The last song played for our portion of the show was a hit for the Isley Brothers and a megsa hit by the Beatles, Twist and Shout.

And I always get a boost to my ego when a professional tells me I did a good job announcing. The announcer for St. Vincent-St. Mary is the morning host and program director at WONE, Tim Daugherty. We have talked at other shows and he always treats me like we are old friends. Tim is a class act and one who lets his voice add to the show and not be the show. It's important that the show remain on the field and not in the press box. Tim gets that and is a good example for other announcers to follow.


I hope to keep this up this season and Lord willing, see you all next week for the first halftime show of the 2012 season.