For a moment, the North Pole is in Baton Rouge

This story starts this past summer. I was searching for friends on Facebook, mainly those I went to school with. I had thought of one in particular, I had an image in my mind of high school football games. The game announcer was born in Scotland and he still had a very thick accent. One of the players on our team was named Bob Buesch, pronounced "bush". However, Mr. Cranston would announce "tackle by Bob Booooosh." 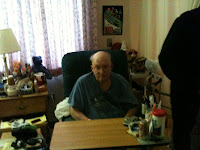 Anyway I thought I would see if any of the Buesch brothers were on Facebook. I found George. George is about 2-3 years older than I.  I requested to "friend" George. George was on line at that moment and immediately accepted. I then looked at George's profile and found that he had Parkinson's disease. About that time, George started chatting with me.He told me that he was now living in a nursing home. He asked me to come see him. Several weeks later, I went to see him on his birthday. I also asked those who went to school with us and were still living in the area to try to drop a note or even pay him a visit. And there are those who send George messages, to let him know they care, but there is also one who has taken it a step further.

Patty is a fellow Highland graduate. She graduated 2 years years after me, with my younger brother. Patty's sister, Nancy was in my class, a cheerleader. I had the distinction of running against Nancy for senior class vice president. For some reason, I won. Anyway, Patty has taken an interest in George. She now lives in Baton Rouge, LA. And in her checking of George's FB page, she saw a photo of him wearing a Steelers cap, a mortal sin around the Highland contingent on FB. She got George's address and mailed him a box of Cleveland Browns and Indians items, telling him that the next time a photo is taken, he better be wearing the right hat. Cliff Note: George does have a good sense of humor about this. He is also sharp as a tack. 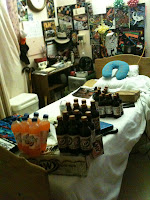 Patty called George last week, who told her that he was in need to some pop and snacks. She asked me if I could get him some pop and told me what kind to get if she sent me the money. I told her I would. I got the money this past Thursday and bought the pop today and took it to him. My sister, son and I took it to him today and also found out what kind of snacks he was allowed to have. The  nurse told me that George was borderline diabetic, but he knew better than the nursing staff what he was allowed to have.

Anyway in this season of giving find someone who can't repay and do something for them. They will really appreciate it far more than you can realize. Plus it does have it's own benefits.
Posted by 74WIXYgrad at 9:02 PM