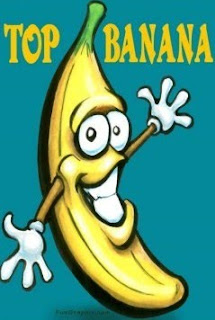 This is the 4th year that I've handed out end of year awards. The first year, I called them the Golden Banana and my friends on the message boards were the recipients. The following year, as I was looking for a graphic, I found the first Google reference to "Golden Banana" was a strip club. I then renamed the award the "Top Banana." The origin of the term is headliner in a Vaudeville act. All who participate here are headliners in my book.

You have all been invaluable friends to me in 2009, helping me through a difficult year and these awards are a way to show my appreciation. Your comments here, reaction to comments I've made on your blog, emails, and notes through the USPS, have given me more encouragement than you could imagine.

As I have noted earlier in this post, these awards are given out in fun and I hope you can have fun along with me.

This post will start out with the international awards. These are good people who are kind enough to communicate with me at times when it might be inconvenient for them to be at the keyboard. A couple of Fridays ago, I was on Facebook chat with Leesa from France. It was 7pm in Ohio, 1am in France. She had to get up at 7:30 her time the next day. Our chat lasted about 1/2 hour.

The European bloggers have one thing in common and that's they aren't originally from Europe. They moved there for one reason and that's love. They went there to marry the love of their lives.

First Top Banana is the "When in France, stop here for cupcakes" award. This goes to Leesa, of News From France fame. Leesa has one of the tastiest blogs around. She also shares much of Europe with her readers. Leesa is originally from San Diego, California, and is also a good prayer partner.

Next is the "3BT" Top Banana. This goes to Amelia, of Amel's Realm fame. 3BT is a list of gratitudes that Amelia periodically posts. She currently lives in Finland but originally hails fron Indonesia.

Next is the "Bananas are good for your health" Top Banana. This goes to Michelle of Crow's Feet fame. Michelle has had some health issues this past year and I hope that this might make her smile, which would help her feel better. Michelle is one who does what she can to make me feel better as we are good friends off the blog and on Facebook, as well as exchanging emails. Michelle lives in Scotland. She moved there from South Africa. She is also a published author.

Come back here often the next several days, as I will be awarding more Top Bananas, but also check out the winners blogs as one of my aims for the Top Banana awards is to promote my friends and their blogs.
Posted by 74WIXYgrad at 4:14 AM

Hey, THANKS SO MUCH for this, Cliff! It makes me SMIIILEEEEE so widely!!! But I couldn't help chuckling in surprise when I found out about the "Golden Banana" reference oh dear...

Love this graphic...and I had to laugh at the 'golden banana' strip club. :)

WHEEEEEEEEEEEEE!!! Oh gosh... I don't know what to say except MERCI BEAUCOUP and that I am very touched and honored to be the recipient of your "Top Banana" award!! I just opened your email after a nice afternoon/evening in Paris with a friend who is visiting from Philly! I went right to your blog and read all those nice things you wrote about me and I thank you dearly and I appreciate our communication!
I'm going to wear this award with great pride, as you have been a great new blogger friend and it's been fun knowing you and sharing our prayers, comments and communication this past year.
Gros bisous à toi, Cliff and Happy Happy New Year to you and your family!!!

Congrats to all the winners. Wonderful choices

You're a good guy Cliff!
Congrats to all the bananas!

You are a treasure. X

On Route 1 North here in Massachusetts there is a strip club named the Golden Banana.

Hale-That's the one that come up first on Google when I plugged in the term 2 years ago.