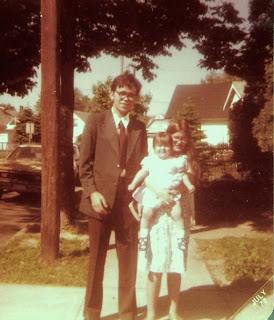 We had moved to the west side of Cleveland, Ohio after Ricky graduated from high school. Ricky was unable to work a traditional job but my parents did get him into a sheltered workshop for a time. On my days off, I would listen to what he was saying about his work. He was proud of what he was doing. On his time off, he would keep himself occupied with the sports section and sports magazines. He would devour them and be able to talk sports with most who could understand him, as he had a habit of talking too fast.

I would play on his love of Cleveland sports and for his birthday one year I took him to a Cleveland Browns game. We took the rapid transit into downtown Cleveland. Before the transit got to the Terminal Tower, Ricky went into a seizure. I got him off the train, but he was still confused and tried to pull me back on while the train was moving. Oh, that day the Browns beat the New York Jets and we did enjoy the game.

There were also times we went to Cleveland Municipal Stadium to watch the Indians play baseball. Those days a crowd of 3,000 was considered large. The stadium seated over 70,000. We would be enjoying a game and one of the Indians top hitters of that time, Andre Thornton, would come to bat. The "crowd" would be unusually quiet when Ricky would stand up and yell at the top of his lungs "HIT A HOMER!" Now it's a known fact that I'm not the quietest person around, but I would sink in my seat as we would hear this at least once more. Cleveland Stadium had a wicked echo when empty. But he would also keep score while watching the game, something I've never been patient enough to do.

But speaking of loud voices, one time my older sister went to the movies with us to watch "Smokey and the Bandit." Ricky and I both had a hearty laugh, and we were watching a very funny movie. Bev, our sister, moved to the other side of the theater and swore that she would never go to the movies with us anymore.

Wasn't the last time we would irritate Bev. May 15, 1981, Kathy went to a baby shower as we were expecting our first child(who now has her own blog), so I went to my folks house to visit. That night the Indians were on TV playing the Toronto Blue Jays. I turned to the channel the game was, only half expecting to see any baseball as it had been raining all day. Baseball was on and Bev stormed out of the room. Ricky and I were getting into the game and it appeared to be a special game. One by one Len Barker was getting the batters out with no one of the Blue Jays reaching base. I was realizing this about the fifth inning. By the sixth inning, my dad come into the room and I told him that Barker was pitching a perfect game. Ricky then chimed in saying that he might get a no hitter too. That's about as bad as the time I told someone that Ray Fosse hit a grand slam with the bases loaded. We cracked up and Ricky, who had this habit of not taking himself too seriously, laughed too. Barker did pitch a perfect game. Watching that was something Ricky never forgot, but he remembered that as the game we watched when "Bev went out of the room, mad as hell."

When I came up, he would always have something he saw in a paper or magazine that he thought I would be interested in. After my daughters were born, he always had something he wanted to give them. Ricky loved all his nieces and nephews. He loved seeing anybody from his family. But no matter what, nobody had better not talk bad about Cliff and Kathy. Ricky would stick up for us and our children.

Photo at the top is Richard, my sister Deirdre, and our niece Aleta, who left a comment on a previous post. Photo was taken in 1977.

Next: Three weeks in ICU and things were never the same.
Posted by 74WIXYgrad at 5:24 PM

Cliff...I love your stories and memories. It is so cool to hear how sports can be such a 'gathering point' for families to unite over. Great stuff. I know exactly what you mean about the 3,000 people in Municipal Stadium. So true.

Cliff, I have been reading your memoirs of your brother. Must be very healing. Not only brought tears to my eyes, but they are literally running down my face.

I too have been reading your memories. Thank you for sharing them with us. I feel as if I had the blessing of meeting him in person. To a degree, I have, through the stories you've shared.
At some, I cried. At some, I giggled.

Here's a hug for your heart.

Cliff,
I have a son with CP and he has had many struggles as he grew to manhood...Physical amd teasing which tore at his self confidence.
I am so glad Ricky had such a supporting and loving family as he did and ya`ll were blessed to have his light in your midst.
Thanks so much for sharing some of his light with us and I am sure heaven is a bit brighter.

thanks for the information on this blog! I find it very interesting and entertaining! hopefully soon have updates that I love your post! I thank you too!
buy viagra
viagra online
generic viagra

Here’s a list of tools you will need to start: Jewelers’ pandora jewellery wire cutters - If you can only afford one pair, get memory wire shears. pandora charms These are designed to make clean cuts on tough memory wire, so can also be used for pandora charms uk softer wires. Chain-nose pliers sometimes called cheap pandora charms needle-nose pliers – Very versatile for picking up and grasping small items, pandora charms sale bending eye pins, closing jumps rings, even closing crimp beads. discount pandora charms Round-nose pliers – Used for creating loops on beaded head and eye pins. Can also be used for winding your own jump rings and as the second pliers you’cheap pandora ll need for closing jump rings. Optional pliers – Wire-looping pliers which have several graduated circumferences to allow you to form perfectly uniform jump rings and loops in place of the pandora discount uk round-nose pliers mentioned above. Crimping pliers which have little notches to allow you to both flatten a crimp bead and then bend it to form a rounded finished look instead of the flat crimp you pandora uk get using the chain-nose pliers. As for materials, I recommend some assortment packs of beads in coordinating colors, some decorative metal spacers, seed beads in both silver and gold These can serve as spacers and beautifully set off pandora sale your other beads., tube-shaped crimp beads Buy the best you can find – these are what hold it all together!, head and eye pins. Other than that, let your choice of project be your guide. You might want some silver or pewter charms.