A laugh that nobody will ever forget

Right after Ricky's 41st birthday my parents made a very difficult, but necessary decision. They could no longer take care of him, so Ricky was placed in a nursing home. A few were checked out and eventually he was placed in one in North Royalton, Ohio. Ricky was upset about it at first, but found out he had more freedom to move around than what he had while at home. He had some activities to participate in and people he could visit with. And mom and Deirdre went to visit about 2-3 times a week.

One more thing he was given after he got there was a TV/VCR combo, along with some of his tapes from home. And Ricky, being the creature of habit he was, always watched his Saturday morning cartoons. the staff soon become familiar with his laugh which, as it always had been, was a very loud, very hearty laugh. Mom come to visit one day and checked in at the nurses station and was told "Your son really enjoys his cartoons, doesn't he?"

Shortly after the move to the home, Ricky had some seizures, and the nursing home 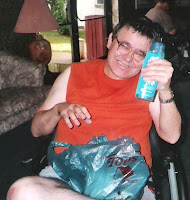 was unsure on how to handle them, so he was sent to the hospital, where he was placed in intensive care. I heard about this from my dad and I called the hospital. I talked to one of the nurses who told me that he was walking past Ricky's room and heard him laughing very loud. Upon investigation, Ricky was in there watching Drew Carey, and the nurse had two laughs from Drew and from Ricky.

My mom and Deirdre were very involved with supplying Ricky with his needs, but mom's health was starting to deteriorate, as the COPD was progressing. My dad passed away within a year of Ricky's admission into the home, so I was starting to assist my mom with some of the decision making.

Shortly after my dad passed away, Kathy started going up to the home and taking Ricky to Wal Mart to get him clothes and personal supplies with money from Ricky's account. My mother would also bring him things to make his life as comfortable as possible. One of the things that kept my mom going was that she was allowed to be our mom. But Kathy and I gradually did more for Ric 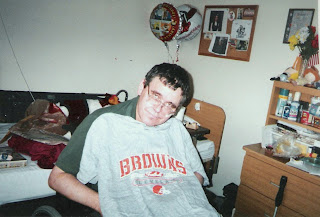 ky while I made it clear that my mom was the final decision maker.

One difficulty Ricky had going into a nursing home at the age of 41 was finding a roommate that was compatible with him, as most others there were in their 70's or 80's. He spent most of his time in North Royalton in a room by himself.

After admission to the nursing home, my mom decided to donate stuffed animals, which seemed to be growing wild around her house to the facility. Ricky would play bingo and win back some of the toys, which he would give back to mom. He would win other things that he would give away to others in the family. Once again always thinking about others.

As mom's health got worse, I moved her to Rittman, within 2 miles of our home. A few weeks later, Ricky was also moved to a facility in Rittman called Autumnwood.

I am really enjoying this tribute. It has been touching to read. Cliff, you have written this so well. Your feelings and thoughts are a great testimony to your brother and family.

I'm still enjoying the stories of your brother. I bet this is theraputic for you to be able to write and think about all these wonderful things.

Keep writing... I'm not tired of the stories!

I want to thank you both for your kind comments. I feel that I have got to take this to completion, which will be another 2-3 posts. It's something that always marked the difference between myself and Ricky. He would see a higher percentage of completion of what he started.

Your comments also answered a question in my mind that I know, if I asked anyone, I would think the answer was more courteous than objective.