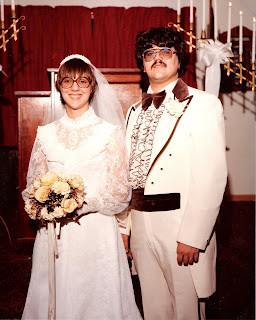 Today is our 29th wedding anniversary. I can tie this into my current story line by saying that Kathy had become both a friend and a guardian angel as well as a sister in law to Ricky over the years.

Ricky liked her first and foremost, because she was my wife. Kathy would take time to listen to what Ricky had to say when others were too busy for him.

Ricky knew that Kathy liked iced tea. One time when he knew that we were coming up for a holiday cookout, he made 27 gallons of sun tea. I guess he was concerned we would run out. Ricky always made Kathy feel welcome when we come up.

In Ricky's later years, Kathy would look out for Ricky's needs and sometimes go to the nursing home and take him to Wal-Mart for whatever he would want or need. There were times after we were legal guardians that one of us would have to go to an appointment for him or on occasion, go to the emergency room to meet the ambulance. One time Kathy got to the hospital, back to Ricky's room and he told the nurse "This is my sister in law, Kathy. She's 46."

Kathy arranged the transfer of Ricky from one nursing home to another when I moved my mother closer to us so we could attend to her needs. She also pulled strings to get him into sheltered workshop. When Ricky was asked a question about himself that he could not answer, his response would always be, "Ask Kathy."

If Ricky would have heroes in the last few years of his life, Kathy would definitely be one of them.
Posted by 74WIXYgrad at 3:32 AM

Cliff...Happy Anniversary! You two were meant to be together. Your love for each other as well as others is incredible. I wish you many more years of happiness.

clif and kathy--happy anniversary. becky and i just celebrated sweet16 on the 7th--david5258

Right after Rick Died, Mom said to me that Rick was one of the few people who needed her. While that isn't true, he was really a blessing for her as much as she was for him.

29 YEARS? the woman deserves saint hood... i bet her mom and dad were just horrified on the day she said i do!!!..he he ... happy aniversary wixy!!! i hope you have 29 more... what did she get you for the special day, a snow shovel?

Obviously, you have an awesome wife!!!

Sounds like a little gem you married!! Happy anniversary.

I'm glad that Ricky had Kathy in his life. And your too.

Happy Anniversary and I'm so glad to hear that Kathy was there for him when needed. He was blessed to have you both.