In a meeting weeks in the making, three members of the blogging underground have met at Milich's Village Inn, 4444 Cleveland Massillon Road, Norton, Ohio. 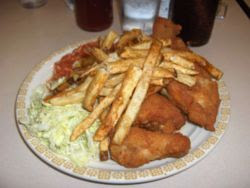 74WIXYgrad, of WIXY's Gone Bananas fame, Struke, of Media Matters Fame, and WZZP, all around good guy, and frequent visitor of many blogs, along with Mrs74WIXYgrad, all had a good time while enjoying a dinner of the succulent fried chicken which has earned Milich's the reputation of having some of the best chicken around.

During this evening's dinner, a call was made to Liquid, of Liquid Illuzion fame. I think she wants to be here for the next blogger's convention.

Here is a picture of the fare we enjoyed at the Village Inn; Chicken, french fries, cole slaw, and hot sauce, which is actually spanish rice with an attitude.
Posted by 74WIXYgrad at 8:31 PM

aww...I am trying to watch what I eat..and that looks GREAT!!

Cliff...great food and great times with great people. I enjoyed it. Thanks!

Cliff,
Just stopping by to get caught up again on my blog reading. Thank you very much for the plug about my soup.

I loved the picture of the mail box. HE HE HE HE

I hope you are feeling better.

The dinner you had looked good and glad to read you had a good time.

I am also tired of being tired and can not wait for the warm wheather. All it has been doing here is rain, but I always look to a brighter side. The roofers were able to find the leak and fix it, so the rain is a good thing. HE HE HE HE God Bless and Keep smiling:-)

Gee, I wanted to be there too! The food looks good and glad you guys had a wonderful time!

WIXY:
I kept thinking..Barberton Chicken..Norton is next to Barberton..With SARTA and Metro, I might have made that with you guys..Should have looked into it..Maybe some time..I love Chucken anyway and would have loved to sample the fare there at Milich's..Glad you all had a good time..

ahh good stuff wixy. did you catch joe tate's call the other evening? what was it 3,000 games? oh how i remeber him when we used to get wuab done here, and his voice giving us his play by play of the ole tribe. when you talked about len barker and you and ricky checking out his no no his voice popped back into my head again!!

Fried Chicken. One day when I am in the hospital getting my arteries cleaned out I will be thinking of this great night we spent talking, laughing, and eating. It was an enjoyable evening.

It was so good to join you each, via the telephone, for dinner.
Can I tell you what I am going to "attempt" for dinner tonight here, in Mississippi?
Yup, everything I see on that plate.

I've been "drooling" since we were cut off........arrrggggggghhhhhh, darn tin roofs!

Liquid, you need to take a picture of the finished product and post it. Also tell us what your family thinks of it.

Anyone else looking for the recipe, all you need to do is type "Barberton Chicken Recipe" in your search engine.

Liquid,
I may be heading to the southern part of your state late this summer for an event we were just informed of. Maybe, since Kevin has decided he wants to DRIVE it, we can make plans to meet up either on the way there or back?

To everyone else,
if you try to make the chicken it won't work without buckets of lard...sorry...

I was wondering how we were going to be able to send the chicken to Suzanne via the telephone. She said it was good.

She has the recipe. All she needs to do is go to Evil Big Box Store #1271 and get the ingredients.

It's all in the breading and how they cook it. You can't beat good fried chicken with the sides. I prefer the cottage cheese, applesauce and mashed potatoes.

Cliff...if you ever are in North Canton, stop in at the Chicken Manor restaurant. I get their buttered noodles with the chicken. Very good.

Now THAT is what I call chicken!!!