Cliff Note: This is a little out of sequence, and the last show is still in draft and incomplete. It should be up in the next day or so. 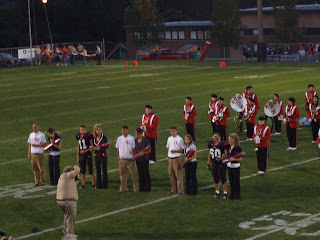 Ahh yes, homecoming, when all the old graduates come back. The court is introduced and the queen is crowned. And a football game is played.

Friday night the young and struggling Rittman Fighting Indians were host to the Hooterville, I mean Norwayne Bobcats. There were some big boys on the Norwayne squad. It looked as though they all had loaded their share of hay on the wagon this past summer. I am just kidding, but Norwayne does have a day during the school year when some of the students drive their tractors to school.

But I will say, the fearless leader of the World's Greatest Band Boosters(tm 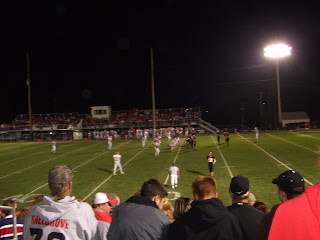 ) did give me my band t-shirt before the game. The back of the shirt does say "It's all about halftime" so we will go straight to the halftime show. 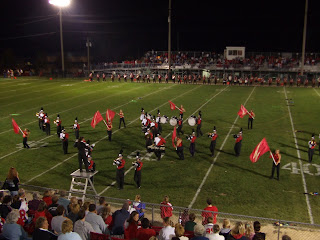 Our guests, the Norwayne Marching band was the first up with a sampling of the show they use during their band competitions. Since their banbd director was a drummer in college, their drum line, although small, is rather impressive.

Their show for this night was selections from Superman and they ended the show in a Superman insignia midfield. 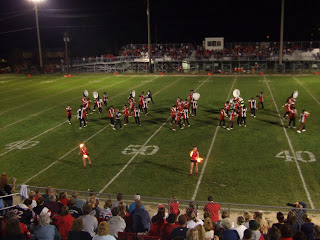 After the Marching Bobcats left the field, it was time to please the home crowd with the seventieth edition of the Rittman Indians Marching Band!

Cliff Note: It was great to be back behind the home microphone after being away for a month.

After opening the homecoming halftime show with "Prime Time," it was time to showcase the talents of one of our student musicians. Senior euphonium player Caleb wrote the marching routine performed to the hit song from "Austin Powers," "Soul Bossa Nova." All I could say was "YEAH BABY!"

The show ended with "Born to be Wild" pictured above with Brooke and Aimee twirling fire batons. The appreciative audience loved it.

I wish to conclude this post by stating that the show band is alive and well and marching in Rittman, Ohio. We are here to entertain.

I love the song choices!
I imagine that halftime was VERY entertaining.

Your enthusiasm for the band is great, Wixy! I can hear your pride in those kids through these posts. :)

Ooops, sorry about another loss for the football team though. :(

Daisy, the enthusiasm this past Friday was on the field, in the stands, and in the pressbox. I have a great product to shout about and the audience showed their appreciation by their response. These students put a lot of hard work year round in their music. They also work long and hard during the summer to perfect their marching. I don't mind giving them the credit they deserve.

And Liquid, it was entertaining. I heard good things about both bands from people I talked to after the game.

did your kids go to rittman wixy?

Those raised in my home went to Rittman. Now as a matter of pride, my alma mater happens to be Highland High School, in Medina County. The Highland Hornets are currently 6-0.

transfer back there wixy!!! he he!!