A (somewhat) safe haven in the blogosphere.

I have been surfing around blogger today, reading several spins on the election, and you know what? I hope you've come here to escape that. I will make one comment and move on.

mment: I agree with the statement made in the comments section on my last post. I hope that all the people who turned out to vote yesterday also turn out to vote in local elections, and for tax levys. You can't change things at the top if you're not willing to change at the bottom.

Media comment: Even though alot of my inspiration and influence comes 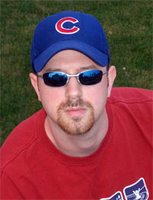 from Ohio Media Watch, I try not to speak too much on radio and television, except on discussion boards. This comes from a comment I made on the listening party board at Cleveland.com. I was using the copier in the office next to mine yesterday, and the radio on in that office was tuned to WXRK/92.5. Rover's Morning Glory was on. For informational purposes, just in case you don't know what a Rover is, to your right is an illustration, and no, he's not from Rootstown. Anyway I heard him use the Lord's name in vain, not once but twice in a ten second period. I posted on the board that "even though I know the FCC allows language like this, it offends me and I wish he wouldn't use it" I went on to post that "the potty mouth is not needed." Well I was pretty much accused of "wanting to stomp a little more on the Bill of Rights."

I guess the only thing you can't say on the air anymore is that Jesus loves you.

Decent people needed: No, Rittman isn't Mayberry, but you have to have pride in a town that has laws against children under 18 smoking. You have to be glad that the high school principal went to Catholic schools, and shows it in his style of discipline, who lays down the law at freshman orientation and tells the parents if any students square off to fight they will be suspended, and if they draw blood, they will leave the school in handcuffs. We have many decent people in Rittman, and we can always use more.
One friend of this blog was talking to me this past weekend about XM and Sirius. She and her husband had just bought a car, and wanted satellite radio, due to some of the traveling they do. They didn't want Sirius, simply because they didn't want to be subjected to Howard Stern.
You don't need to be filthy to be funny. I don't think the framers of the constitution was thinking of people making off color statements in public when they wrote the first amendment.
Posted by 74WIXYgrad at 7:00 PM