From the Pressbox: Edison 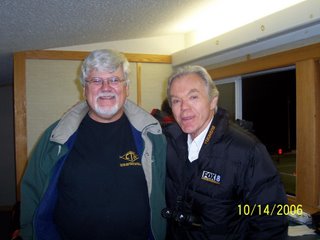 On Saturday the MrsWIXYmobile took myself and my daughter Sylva, former Rittman marching band member, to Edison High School in Milan for the Edison Marching band review.

And we would like to thank Dick Goddard for sending the snow to Buffalo.
That has been the only ad libbing that I have done all season, and it went without any stuttering or stammering.

The show itself was outstanding. the audience at Edison is always a very good one. Nick Georgiafandis, Edison band director, and his folks put together a great show. I was very impressed with the percussion of just about every band.

Dick Goddard, this weekend, the busiest man in Cleveland media, was the master of ceremonies of this show. Mr. Goddard will be putting the miles on his vehicle this weekend as he also had the Woolybear Festival in Vermillion on Sunday. Dick Goddard has been the MC of one show per year that I've announced at since becoming the voice of the Rittman Marching band. He has a very special talent of calming down nervious first year announcers.

I have now seen it all: The Edison band always puts on a very entertaining show, as most of the time they have a tendency of using carbon dioxide fire extinguishers in their show. Last night the extinguisher emulated diesel exhaust, as the band did as their first number "Convoy", the C.W. McCall classic. I have never seen "Convoy" done by a marching band, but if any band could pull it off, it's Edison.

Kelly Georgiafandis, wife of Nick, was a very gracious hostess in the press box. She told Sylva about the times that people tell her that their band can do the things they do because they are so large(140 members). She tells them that they should see the Rittman Band(40 members).

Cliff Notes: My daughter took some pictures at the show, and when we get some technical problems worked out they will appear on this blog.

Alan Courtright, son of legendary newsman Ken Courtright sent me a very nice e-mail, seeing that he saw a comment of mine on Ohio Media Watch.

And lastly, I want to state here that I feel that OMW got a raw deal the way he was treated on cleveland.com message boards the past few days.

Special notice:This blog has been busted by the grammar police aka my daughter Sylva, who will be starting her student teaching soon.
Posted by 74WIXYgrad at 4:52 PM

WIXY:
I agree about OMW getting the shaft..As I said in Listening Party a few days ago..WHERE ARE THE MODERATORS?..I think either the PD needs to police these forums better, or go to a completely different format with safeguards built in..