From the Pressbox: Rittman Band Revue 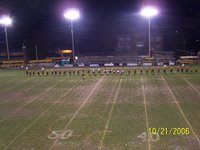 The following is the final edition of "From the pressbox" for the 2006 marching season.

Click on photos to get better view, then hit back button to come back to blog.

It was with great anticipation and intense preparation that lead th the sixteenth annual Rittman Indians Marching Band Revue. Band director Ed Sims had the band at the stadium early on Saturday to insure that all participants and spectators had an enjoyable time this evening. The field had a drying agent(kitty litter) spread on it, in order to make the field as safe as possible for all student musicians. The (Worlds Greatest) Band Boosters(tm) worked hard in ticket sales, tending to the raffles, and preparing their gourmet fare in the concession stands.

Rittman High principal Joe
Magnacca was on hand to give moral support to his students, and to help out in trying to baby an ailing public address system(among other things).

Six bands were on hand to entertain the faithful tonight. 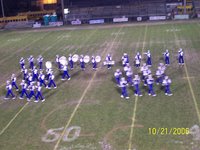 The Garaway Pirate Marching Band, with their announcer Jim Scherr, played hits by Paul Simon, and songs from the early nineties. 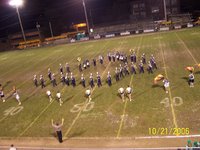 The Rootstown Rover Marching Band had a guest announcer tonight(the self proclaimed loudest announcer in Northern Ohio). They gave us some heavy metal favorites from Ozzy Osbourne, Motley Crue, and Metallica.

Before intermission we were entertained by the Vermillion Sailor Marching Band, with their announcer Mrs. Pat Price. The Doobie Brothers "Long Train Running" and Nancy Sinatra's "These Boots are Made for Walking" were among the hit songs played by Vermillion. 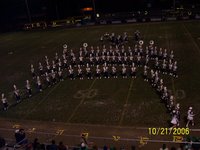 East Canton Hornet Marching Band, their guest announcer was a "close personal friend of my wife", is the first band to play after a twenty five minute intermission. They began and ended their show with drills, to latin hits "Evil Ways" and "Aztec Fire", designed by senior members of their band.

Every show that we participated in this season had at least one good drum major, and the Mogodore Wildcat Marching Band did not disappoint us tonight. Their selections included a dance routine to the song "Tequilla" Their regular announcer did not make it, but student announcer Chris Cain did a very commendable job.

It all lead to this point:
"Ladies and gentlemen, for your viewing and listening pleasure...
we take great pride in presenting to YOU....
The sixty-eighth edition of the RITTMAN...INDIANS...MARCHHHIIIIINNNNNGGGG BAND"

The Rittman Indians Marching Band saved the best for last this year. They came on the field performing the Bobby Darrin classic "Splish Splash". Next came the the majorette feature to the hit song by Jet, "Are you Gonna be My Girl" Following was hit songs from television detective series, "Peter Gunn", "Secret Agent Man" and "Batman". The final song introduction of the year was my favorite, Fats Waller's "The Joint is Jumpin".

Quite a few prizes were given away at the conclusion of the the show, but everybody there were winners.

Cliff Notes: The show was somewhat bittersweet, as it marked the final appearance in Rittman for Joe Price as Diecetor of the Vermillion Marching Band, and His wife Pat, who has announced their shows over the years. Pat was one of my early influences in the early years of my announcing. We have teased each other over the years and Both Joe and Pat will be missed. 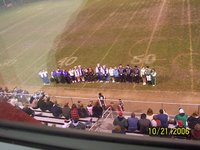 Jim Scherr, Garaway announcer has been a frequent contact in press boxes over the past six seasons. First time I announced at Garaway in 2001, I had one of the worst cases of laryngitis ever. He's been a great means of support, and an active supporter of Garaway Schools.

The World's Greatest Band Boosters(tm) are also a bashful bunch of folks, as theWIXY's Gone Bananas official photographer was not allowed to take their picture for this blog. 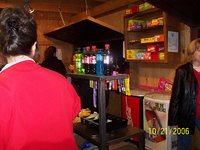 Final thanks go to the afore mentioned WGBB(tm), who go out of their way to make me feel special. Ed Sims and Becky Cline, for your guidence on the field that helps me have a product I can shout about. Lastly to Joe Magnacca, Rittman principal for being the disciplinarian, and leader that Rittman students can look up to.

Cliff,
The WGBB would also like to thank you for your outstanding support to our band all these years.
GREAT JOB!!!