After three weeks on the road, our Rittman Fighting Indians are back at the comfy confines of Rittman Stadium. The night started out with with the area youth football program, the Eagles and their cheerleaders being recognized before game time. Of course I had the WIXYcam with me and I took some pictures from my perch 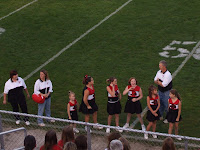 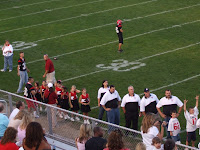 in the press box. 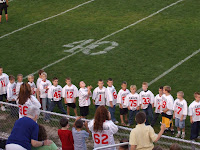 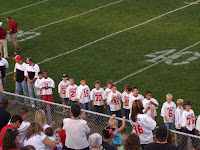 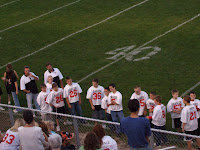 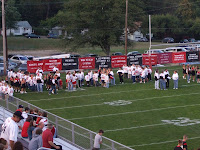 Ball game: Rittman, 0-4 going into the nights contest were banged up from previous action. Northwestern, playoff team in the past two seasons started a very experienced team. The game ended up 57-13 in Nortewestern's favor but it probably wasn't that close. One thing that has impressed me over the years about Northwestern is the fact that they show a lot class and sportsmanship. The fact that Rittman showed up for the game 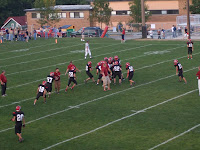 speaks volumes. They made mistakes but the mistakes were a major result of inexperience. The fact that they haven't quit at this point shows a lot of class on the Fighting Indians part. 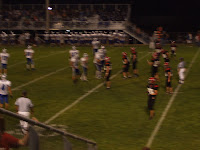 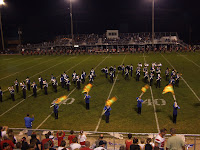 marches about 55, and put on a very good musical show last night. Once again these students from West Salem are a very respectful group of young people.

Rittman portion: The Rittman Indians Marching Band took the field last night, their first performance in the past four weeks on natural grass. New to the show this week was our v 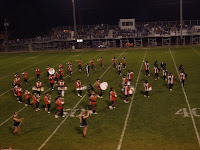 ersion of Gloria Estafan and the Miami Sound Machine's "Conga." It was also the first time the home audience saw the band perform "Wipe Out" and they loved it.

The "hole" story: New to the WGBB concession stand this week was Lerch's Donuts, those of Wayne County Fair fame. I was asked to announce about the abvailability of them and people went to the stand after halftime and were buying them by the dozen.

Next up: We travel to Vermillion for the 36th annual Vermillion Sailor Band Show. Dick Goddard, Fox8 weatherman and living legend will be MC tonight and will also sing the national anthem. The fun starts at 7:30.
Posted by 74WIXYgrad at 11:09 AM