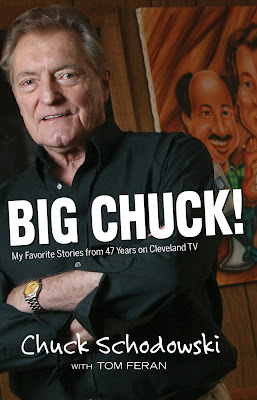 Update 01/12/09: Click here to read a related article on Ohio Media Watch, along with a review of the book.

Cliff Note: It's the second article in the OMW post.

I spent a good portion of my Friday nights while I was going through my preteen and teenage years watching a television show called "The Hoolihan and Big Chuck Show." In high school, I was on the wrestling and football teams. One of my teammates was a quiet young man named Mike Schodowski. His father is Charles Schodowski, also known as Big Chuck. The book I'm about to review chronicles his 47 years as a part of Cleveland television history.

The book tells how Chuck come from a family living in the Slavic Village neighborhood in Cleveland, how he went from working in a foundry on Cleveland's east side, to going into Cleveland television, first at KYW, channel 3 to WJW, channel 8, and how he became a Cleveland icon.

Chuck started out as a camera man and went into directing. He was a part of the phenomenon called Ghoulardi. Ghoulardi was Ernie Anderson, who went on to fame as the booth announcer for ABC. Most of you would remember hearing, "Saturday night, on the Looooove Boat." That was Ernie. He and Tim Conway attempted for years to get Chuck to move to California, but Chuck is Cleveland born and Cleveland bred and wanted to stay in Cleveland. We Cleveland area people are richer for that.

Big Chuck! also tells about the all star teams in softball and basketball, how they would play games to benefit the representatives of the places they were playing. I recall when the Hoolihan and Big Chuck all stars played the faculty of Highland High during my senior year of high school. One of the players was "Lil John" Rinaldi, who would later become co-host of the Friday night show. This particular evening he was lip syncing and doing a mock striptease to Tom Jones' "She's a Lady." That night I was running the scoreboard and heard Lil John tell the announcer that he could barely breathe and was suffering from bronchitis. I doubt if anyone else that paid to see this game knew.

Big Chuck also was involved in much of the technical side at WJW for years. This included during the early years running the sideline mic during Browns games and producing news. While running the mic at a Browns game during the 60's, Chuck was run over by Jim Brown, who was running out of bounds. Now that's one heck of a story to be able to tell your grandchildren. Another of Chuck's accomplishments is producing a film of boating safety for the Coast Guard, which leads me to another personal story: Highland had a program they called Experiment in Free Form Education-EFFE. During this one day event, the school, in cooperation with student council, invited people from many areas of the community. One of the classes was film production, taught by Chuck Schodowski. During the class he showed the film on boating safety. He had included in this film several of my classmates as extras. And though the film was produced over 35 years ago, the Coast Guard still shows it.

At his count there were over 2000 skits done during the Ghoulardi/Hoolihan and Big Chuck/Big Chuck and Lil John years, over 40 years in all. Most of the time I never payed much attention to the movie. The skits were what we all talked about, and still talk about. Ben Crazy, Soulman, Certain Ethnic Guy, all these skits are heavily viewed on You Tube, and will be for years to come.

In Big Chuck!, he introduces us to his co-workers, people like Art Lofredo, Dick Goddard and others. He tells us about his family and how he's proud of the way they all turned out. He tells of folks, like Tom Hanks, who were big fans of the show. Chuck Schodowski also pays homage to the fans, and to Cleveland.

I say that if you've not read the book and you are a Cleveland television fan, or even a broadcasting geek, you owe it to yourself to get a copy. Click here to order your own copy from Amazon.

The book was an easy read and hard to put down. I had originally started writing this review on Christmas Day, but circumstances took this blog in a different direction.
Posted by 74WIXYgrad at 11:36 AM

Must have been really something to be involved in so many aspects of productions back then. What a great story.

I always like the fact that I got to see Chuck Schodowski at some school athletic events. A very nice man and well deserving of the praise he gets.

And Sandy, I hope you noticed that I put my Liquid links on my sidebar. My blog is a little too fast moving to keep a regular post up where people can get to it.

I loved the canned laugh at the end of the bits. Certain Ethnic Guy was hilarious.

The canned laugh was even a Cleveland original. Jay Lawrence, a disc jockey at KYW/1100 performed that laugh in the 60's.

Like the book says, even if you thought the skit was funny, you didn't laugh until you got the cue, "Ha-ha!"

I used to watch big chuck and Goulardi all the time while growing up. Maybe it explains why I still like bad B horror films to this day. One of my favorite movies that they played all the time was Duel starring Dennis Weaver, which was one of Steven Spielberg's first movies.

WIXY:
As you may know, I am one of the moderators for bigchuckandliljohn.com. I bought one of the first books out and you are right, you cant put it down. Got to meet Chuck and John at Ghoulardifest this year and Chuck at a book signing at Borders/North Canton in December..Very real and down to earth..They dont have "stars in their eyes"..never did..Just real folks..

I have fond memories of sitting in the lounge at Holden Hall at the College of Wooster in 1976, ordering Domino's pizza, and laughing along with Big Chuck and Lil John.(with Pigeon and her future husband,among others!) Thanks for the trip down memory lane..now if you'll excuse me, I'm off to Youtube.

When my dad was sick, and suing the company he had worked for. Channel 8 did an interview with him, and dad was elated that Soulman was the cameraman!!

I have heard many good things about Soulman aka Herb Thomas, as well as others who played a part in the show.

Pigeon:
Thats the great thing about Hoolihan/Big Chuck/Lil John..and the people that worked with them. They could be your next door neighbor or bowling buddy or a person you work with.

is that sherman hemsley in the background?

If you go to YouTube and look for the Soulman pie fight, you will see in the comments something to back up Tim's point.

Wow, I've been a New Englander for 15 years, got to you via Ginny's blogroll. Thought there might be more than one WIXY but when I saw the pic of Big Chuck (please tell me that he's not dead)I knew we were talking Cleveland. Grew up in Norwalk, lived in Elyria, Cleve Hts, Slavic Village and then out in Ashtabula. Just kept moving East! Great to read your stuff.

This season is all about lace. thomas sabo schmuck günstig I am talking about crocheted cotton lace, sabo charms the kind your great grandmother thomas sabo engelsflügel wore. Think of the old doilies she used to angebote thomas sabo make. Lace is on everything these days from clothing, handbags and the rest of the accessories. You will see handbags made out of it or adorned with it. It is made into lightweight thomas sabo flowy scarves. Bangles are big and anhänger thomas sabo covered in lace with matching necklaces and earrings. The thomas sabo kette necklaces have lace beaded into it, thomas sabo 2010 beaded with lacey disk beads thomas sabo online shop or lacey beads themselves. It will not be hard to find a great shirt with lace on the top and accessorize it with matching earrings, thomas sabo halsschmuck necklaces, scarves or handbags. thomas sabo ohrringe Use them tastefully together but don't go overboard. A little of each goes a long way. Handmade is big in this category so don't go looking only at stores; keep those art shows in mind for that unique great find.